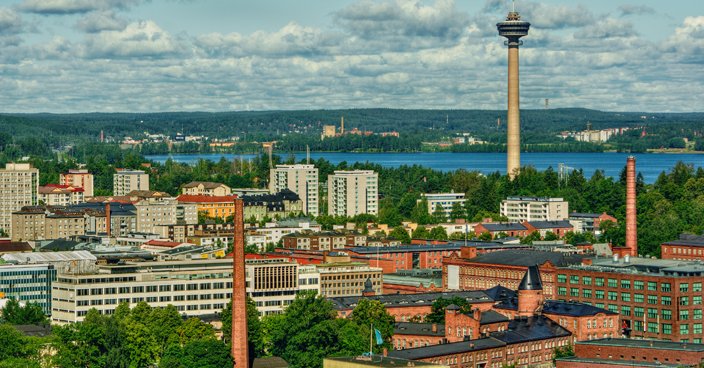 The city of Tampere, the second most populous in Finland, has a rich technological history, with Nokia being founded here more than 150 years ago. Yet its future revolves in part around how it copes with making its infrastructure smarter.

Kevin Ashton, the forefather of the term Internet of Things, discusses in a recent eBook about how startlingly ‘dumb’ most cities are. Street lights are on when they don’t need to be. Countless litres of petrol are wasted by drivers trying to find parking; not to mention the water lost through leaks in the system. Ashton argues that ‘dumb’ cities were previously manageable, but the increasing urban sprawl will soon see hands being forced.

In Tampere’s case, the scope of its population gives the city a certain advantage, as Tero Blomqvist, program director for the city’s connected initiative, Smart Tampere, explains. “Tampere is known as the home town of Nokia smartphones, and the post-Nokia era means we have literally thousands of IT professionals working in startups and other innovative companies – not to mention the younger generation graduating from the three universities [University of Technology, University of Applied Sciences, University of Tampere],” he says. “The skilled workforce is our greatest asset when it comes to smartness.”

Not only that, but there is strong ambition across the board – and long-term goals to match. Blomqvist, who is speaking at the IoT Tech Expo in Berlin in June, explains that around €10 billion (£8.4bn) has been secured in private and public investments in the coming 15 years on a variety of projects, including new residential areas, a tramway, and a sports arena. “All these work as platforms for testing and developing smart city solutions,” he says.

Blomqvist’s role as the director of the Smart Tampere program isn’t just getting the bricks and mortar in place but also eulogising and evangelising. “My role is to build the Smart Tampere ecosystem story and plan, support our theme leaders, meet prospective companies and organisations interested in joining and make sure all the areas of the program are moving ahead as planned,” he explains.

Of course, this doesn’t mean it’s a lone furrow being ploughed. Jonathan Reichental, CIO of the City of Palo Alto, and a previous speaker at the IoT Tech Expo, explained that as a relatively small area – a population of just over 65,000 at the last count – the city can act as something of a test bed.

Blomqvist sees it similarly. “Tampere is in a good stage now where our infrastructure is still in the early days of smart, which means that we have the opportunity to learn from others and make sure different parts of city development talk to each other,” he says. “Also, we already have an idea of what the future might bring, so we can start by building a network and connectivity that won’t fall short any time soon.”

This means technological expansion can go as far as it needs to go – in response to the question of which technologies are of interest personally and professionally, Blomqvist replies “personally I have interest to all kind of technology things…professionally, my interest is how to utilise technology to serve a better citizen democracy in the city environment” – but for now, the outlook is bright.

“Tampere has brave leaders who see further and are willing to invest in the future,” says Blomqvist. “I don’t see any big challenges – I only see huge potential.”